Microchip has been very acquisition-hungry as of late, recently purchasing Atmel among many others.  While their product line expands, the most noticeable might be the merging of the two largest 8-bit microcontroller providers.  The PIC Micro and the AVR are now owned by Microchip and both have a stronghold in the industry and in the maker community.  The most popular Arduinos are composed of AVR chips.  Luckily, Microchip has announced that they will be keeping the Atmel name and product line separate.  For the majority of people, nothing will change.

With the rise of low-cost Arm Cortex-M0 processors though, one wonders what the future of the 8-bit world holds. However, Microchip’s 8-bit line still offers much to the engineer. For instance, it provides plenty of processing power for many embedded applications, in addition to many varieties of PIC Microcontrollers available (more than 1,200), the low pin count (down to 4 pins) and super low price (as low as $0.31) and the fact that Microchip very rarely stops production on any of their microcontrollers. All this means that they will be a viable option for years to come. 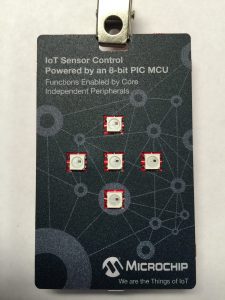 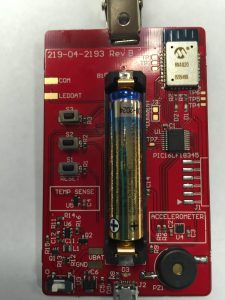 The AAA cell battery on the back is a little out of place and makes for a heavier badge than I think it should have. I would have chosen a coin-cell to reduce the protrusion from the board. It also would have been nice to have the ability to tap into the board via a header to add some additional hardware and turn this demonstration board into a development board.

As far as demonstration boards go, this is quite fun to play with. It provides a header to attach a Pickit and easily program and debug in-circuit.  The source code is surprisingly very simple, akin to a quick test application one might throw together. The in-source comments are spare but useful. This was a pleasant surprise when compared to the overabundance of proprietary copyright and comments per line.

While those ARMs may look appealing, don’t forget about the 8-bit PIC/AVR offerings.  The nature of embedded design dictates that we always strive for a lower unit cost and faster to-production times.  Tiny and cheap, tiny and cheap.